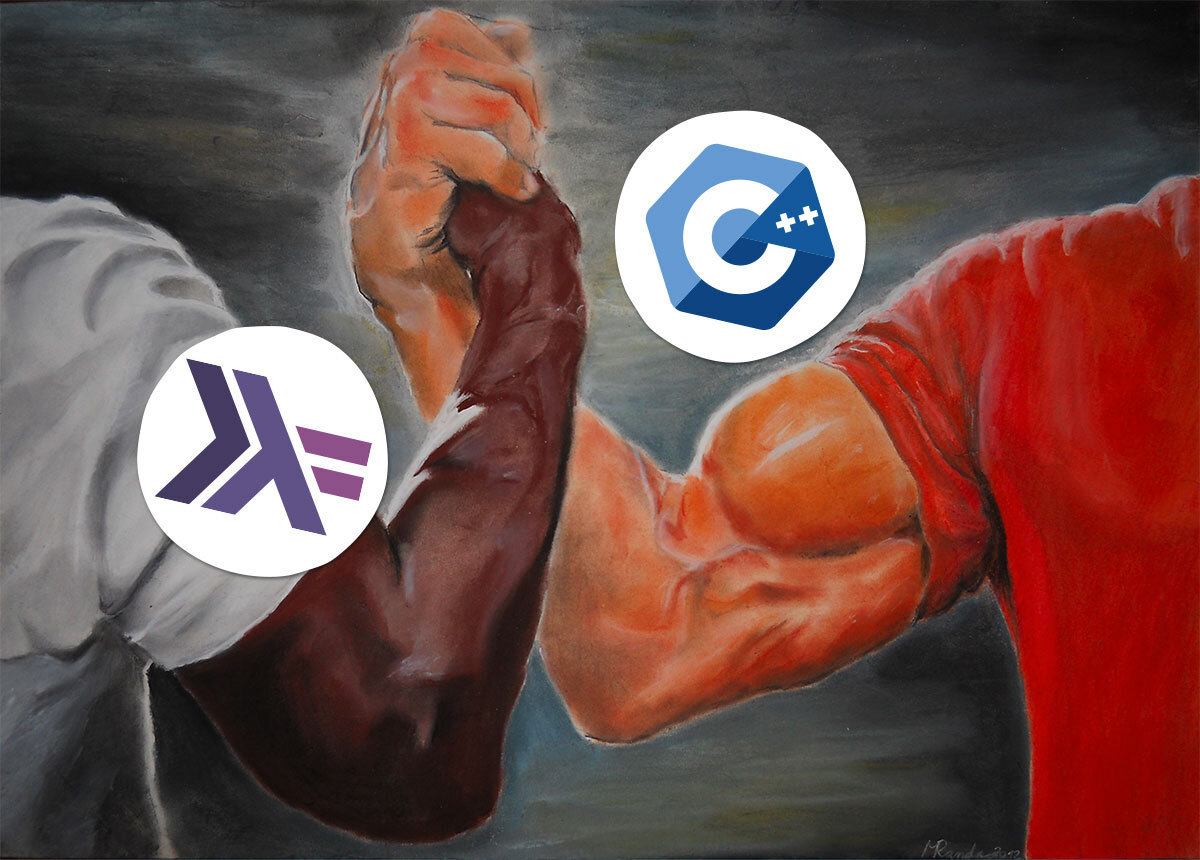 In today's blogpost, I will show an approach for calling C++ code from Haskell. This can be useful in case you need the extra performance from C++ or if there is no library in the Haskell ecosystem that provides the functionality you need (but there is a C++ library for it).

The code snippets in this article are kept "simple" (though I will assume some C++ knowledge, since you will need to write some extra C++ code when binding to Haskell). The examples are derived from my souffle-haskell library, where I had to write Haskell bindings to interact with the Soufflé datalog language.

If a library is meant to be used from many other languages, most of the time it will provide a C API for doing so. C has a relatively small feature-set and a well-defined, stable ABI (binary interface). On top of that, most languages have good support for interacting with C via a foreign function interface (FFI), making it straight-forward to interface with C.

However, for some libraries this is not the case. Soufflé for example provides only a C++ interface. C++ is a lot bigger language compared to C, has no stable ABI between different versions / compilers and contains many complex features such as overloadable functions and operators, templates, destructors, ... This makes binding to it a lot more complicated than C.

The trick is to write an extra layer between the existing Haskell and C++ code, that exposes functionality using the C ABI. Fortunately, C++ offers an easy way to be compatible with the C ABI with the extern keyword. The snippet below defines a function "answer_to_everything" that can be called from C (and thus also from other languages!):

When using extern, you can still use C++-specific functionality inside the body of a function, but the signature of the function needs to be compatible with C.

If you wanted to, you could now start using this function in Haskell after importing it with a so-called foreign import:

A foreign import is Haskell's way of importing C-compatible functions. Note that unlike Haskell modules, you will need to import foreign functions on a per-function basis. The syntax is as follows:

Now that we know how to cross the language border and use a simple C++ function from Haskell, we can focus on other more complicated concepts.

First of all, there's memory management. Haskell uses a a garbage collector to clean up unused memory automatically. This is in contrast with C++, which is much "closer to the metal". C++ gives you very fine-grained control of the memory layout of an object and when exactly to allocate or free the memory of an object. If we want to bind C++ to Haskell, we have to make sure both languages work well together. One way to achieve this is by letting Haskell be in charge and call into the C++ code. Objects used via the FFI need to be allocated on the C++ heap, so they don't automatically get cleaned up once the object goes out of scope (like stack-allocated objects would). After objects are no longer in use, they need to be cleaned up again (also from the Haskell side).

The next issue are the objects themselves. The C ABI has no support for objects or calling methods on those objects. This isn't a problem though, since objects can be represented as an (opaque) C-like struct, together with functions that perform actions with that struct. Each of the functions has the same signature as the corresponding method of the object, except the function takes an additional argument for the pointer to the object. (In C++ this is handled implicitly for you with the this pointer.) Constructors and destructors also need to have their own separate functions in the FFI.

Taking all this into account, our FFI layer for managing a C++ object could look like this:

Now that we have the C++ part, we still need to write the Haskell part. To do this, we use an API from the Haskell base library for interacting with foreign functions. It provides data types that have a 1-to-1 correspondence with their C equivalents (for example CInt, CBool, ...). The Ptr data type is used for managing pointers from Haskell. The Ptr type uses a phantom type variable as a type-level tag to detect at compile time if you use a pointer of an unexpected type.

You may have noticed in the last C++ snippet that there was a manual call to delete. This is frowned upon in C++ nowadays since it can be very easy to make a mistake and forget to call delete in certain code paths (for example if an exception occurred). C++ has a solution for this in the form of so-called smart pointers but those are unusable in combination with the FFI. Haskell has a very similar mechanism though, called foreign pointers. A foreign pointer is a pointer managed by the Haskell runtime / garbage collector, coupled with a finalizer function for freeing up the memory used by the pointer. When the foreign pointer goes out of scope and there are no more references to it in the Haskell runtime, it will call the finalizer function.

Continuing with the Example class from earlier, we can now make sure the destructor is always called when the object goes out of scope:

C++ has support for overloadable functions (functions with the same name and scope, but with different type signatures and function bodies). However, this is again not supported in C and as such is not possible to do in the FFI. If we want to be able to call these overloads, we have to wrap each variant with a helper function that is exposed in the FFI. If we add an overload to our Example class defined earlier, we can expose overloaded functions as follows:

Finally, each variant has to be imported on the Haskell side:

So far we focused on a single object or data type, but what about multiple objects? In C++ for- or while-loops are used to iterate over collections of data. Loops, like the other concepts mentioned before, will require some massaging into a different format until we have something that can be used from the FFI.

Let's update our previous example to have a collection of some sort:

The example makes use of a range-based for-loop, which was introduced in C++11. Range-based loops are a form of syntactic sugar and can be rewritten using C++ iterators as follows:

While we're at it, a standard for-loop is also sugar for a while-loop. Let's do another transform:

This is starting to come close to something that we can use from the FFI, we only need to write some functions for calling each of the steps of the loop separately:

Writing each of the helper functions is quite a bit of work, but is based on ideas mentioned earlier in this blogpost:

Once we have these functions, we can build our own loop in Haskell and process the values there:

That's it for the code part, but we're not finished quite yet! Because we are using 2 languages, we need to provide compilation flags for both Haskell and C++. This can be done in your project's package.yaml / cabal file / stack.yaml.

For example, in the souffle-haskell library, the package.yaml contains additional configuration instructing the C++ compiler to look for files in the cbits directory and use the given C++ compiler flags:

Note that you should not use cpp-options in the yaml file. This refers to the Haskell C-preprocessor config and does not refer to C++-options like I initially assumed.

Depending on the C++ code you are binding to, you may also need to add specific compiler flags for certain C++ compilers or operating systems. In package.yaml this can be done as follows:

This post turned out much larger than I initially expected! I guess this shows that binding to C++ is more work than C, but can definitely be done. The code in some snippets is simplified to avoid making this blog post even longer. If you are interested in what a "real" example of this approach looks like, check out my souffle-haskell library. You can find the most relevant files for binding to C++ here, here and here.

One final thing to mention is that this approach isn't specific to Haskell, you would only need to swap out the Haskell code with your language of choice to bind to the underlying C++ code.