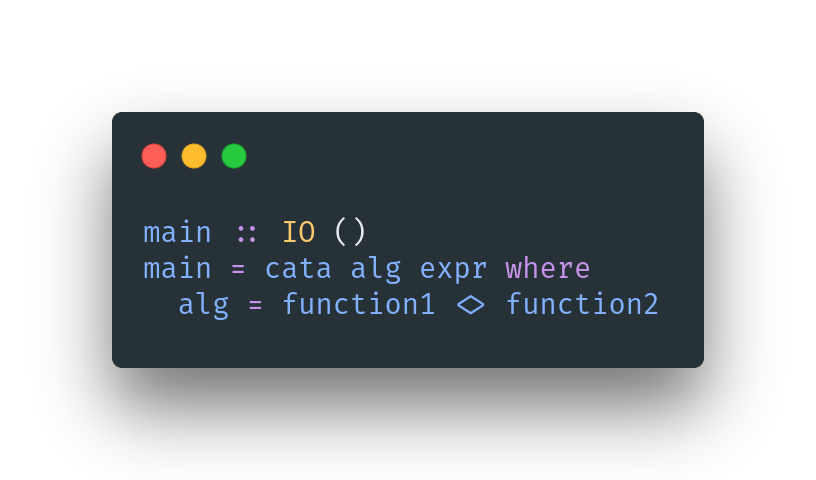 In today's post, I will show how to combine many recursion-scheme folds using semigroups. For seasoned Haskellers using the library, this trick might be well known or obvious, but I decided to write it down anyway for the rest of us mere mortals 😃. I will assume a little familiarity with recursion-schemes though. If this isn't the case, be sure to check out the (recently revised) recursion-schemes README for an introduction to the library.

The naive or straightforward approach

For our running example, let's take the idea of "static analysis" in a compiler. Here, the compiler executes many checks to make sure a program is semantically valid. Implemented in a straightforward way, each check is an (effectful) function that does a full traversal of the program AST to collect the analysis results. If we simplify this idea, we end up with the following:

Running the snippet above gives us the following output:

You can see that each traversal happens one after the other. Ideally though, we would like to collect all analysis results using a single traversal/fold. Let's try and figure out how we can achieve that.

Others have already thought of ways to compose folds using recursion schemes. Tim Williams has a great presentation about recursion schemes where he shows techniques for composing them. First of, there's sequential composition:

However, this approach is not applicable for our static analysis running example due to the types not lining up. The result of the first function (g / y) needs to return a datastructure wrapped in Fix (but we return a IO () value).

The second approach Tim mentions (using the (&&&)-operator from Control.Arrow) is applicable:

For "simple" values, this works great. However, this approach has the same problem as before when you return a function or monadic result instead. To illustrate this, let's run the snippet below:

This gives us the following output:

This is the same behavior as we had before. We perform only one fold now, but then we still have to run the actions separately. That's not what we want! Back to the drawing board!

We tried some forms of composition so far that didn't work out, but luckily Haskell has many more ways of composing expressions together. One that is often used is (<>) / mappend from the Semigroup typeclass. Here's what that looks like:

Effectively, this calls the 2 functions in a row, and then combines the results. Running this code shows all effectful actions are interleaved as we'd expect:

Great! This is exactly what we want. We do only one fold over the datastructure and all actions are interleaved!

Other monads than IO

While the approach using semigroups is short and sweet, it is not always possible to use it directly. This is because the monad that is being used needs to have a Semigroup instance (and IO just so happens to have an implementation for it). With a little more code, we can work around this limitation:

With the "compose" function, you can now also use the same approach for monads that don't implement Semigroup (such as Reader/State/...). Nice!

In this article I showed 3 approaches to combining many smaller folds into one fused fold. Though not all approaches may be applicable for a specific situation, there are always multiple options to choose from when combining functions in this way.

I need to point out that while I used the recursion-schemes library, the same approach is possible if you use "normal" recursive functions (but maybe with a little more work).