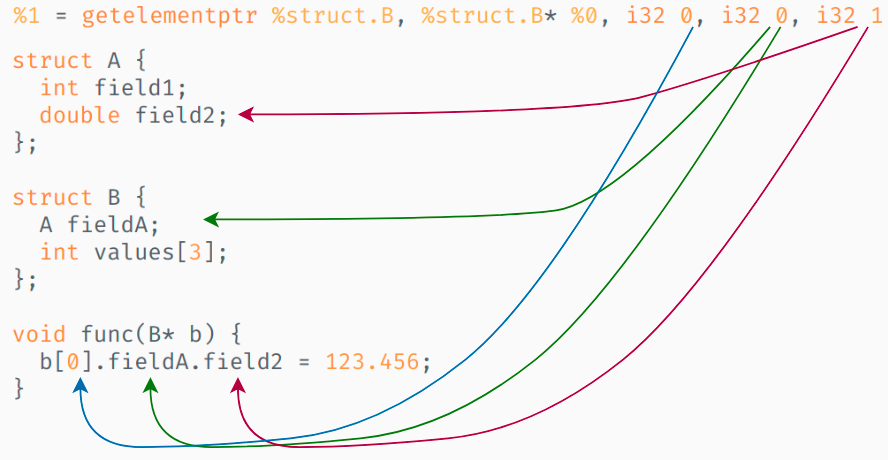 In today's article, I will showcase how Haskell's typesystem can be used to simplify code generation and reduce the chance of bugs involving the LLVM getelementptr instruction.

Intro to the GEP instruction

LLVM as a compiler framework offers many different low-level instructions, one of which being the getelementptr instruction (commonly abbreviated as just "gep"). With gep, you can compute derived pointers/addresses of a nested type inside another data structure, starting from a pointer. It does this by making use of type information and a list of indices into the struct that are supplied.

Here's a small snippet of C++ code and the corresponding instructions that the compiler generates (some details omitted for clarity):

If we take a closer look at the line with the gep instruction, we see that a list of indices is used to index into the B datastructure. The indices correspond with the following:

If we want to generate similar code using the llvm-hs library in Haskell, we need to write the following code:

The translation is straight-forward, but the gep instruction has some problems:

The good thing is that we have some options to fix these issues. Because we are using the Haskell bindings for LLVM, we can use Haskell as a "meta-programming" language for LLVM. Let's see what we can do.

First of, we can start by making a dedicated Indices datatype, that handles the complexity of the gep instruction. For this to be possible, we need to take a few rules into account regarding the GEP instruction:

Written in pseudo-code, this looks as follows:

Given these rules, we can create the following datatype that takes all this into account:

This newtype and Semigroup instance gets us quite far and allows us to compose indices together. However, there's nothing stopping us from composing indices together in the wrong order or in other incorrect ways, which can lead to an invalid list of indices. This can in turn potentially lead to weird bugs (that can only be observed at runtime) because of wrongly calculated pointer offsets.

Keeping track of indices at the type level

Luckily, we can make use of Haskell's typesystem to prevent exactly these sources of bugs! If we think of the indices as a path used to index a data structure, we can make it so paths can only be composed if the end of the first path lines up with the start of the second path. We can keep track of this fact by using two phantom type variables representing the start and end of a path. This gives us the following data type:

The phantom type variables give us additional type safety, but they have changed the kind of Path (to k -> k -> Type). This makes it incompatible with the Semigroup typeclass. This isn't too bad though, since we can think of a new function/operator to compose paths together.

Note: I tried writing a Category instance for Path, but it turns out that there's no good implementation for id that works in all situations. It does form a Semigroupoid (from the semigroupoids package), but I didn't want to pull in an extra dependency for just one type class/function.

Now that we have this Path datatype, we can create a type-safe drop-in replacement for the gep instruction:

Because gep is often used in combination with load and store instructions, we can write additional helper functions to simplify these too:

You can now even create a helper function to copy over specific parts of a datatype (a function I ended up using quite a bit when porting over C code!):

Now that we're armed with all these helper functions, the only thing that is left is to create paths to index into our data structure and compose them together. Note that this is the only place now where you need to be careful constructing the path. Afterwards, the typesystem makes sure all derived paths are correct by construction.

We can now port the earlier mentioned C++ program to LLVM as follows:

And we can verify it still generates the correct LLVM code:

In this post I showed how we can make the LLVM gep instruction safer and easier to use in Haskell by making good use of the typesystem. If you want to see this idea being used in action, you can take a look at this commit where I managed to remove all raw gep instructions by making use of the Path abstraction. The code is slightly different compared to what is presented in this blogpost, but the idea is the same.